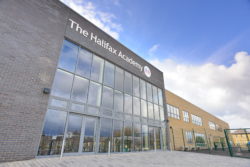 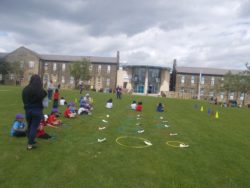 This project involved the construction of a new £4 million, 2 story steel framed primary school building consisting of the main teaching block which included ICT and library rooms, a school hall, dining and kitchen facilities together with extensive hard and soft landscaping play and learning external space with a new car park. The New Halifax Academy Primary school provided a 420 place facility within the grounds of the existing Halifax Academy secondary school to create the first through school in Calderdale.

The approach with the design was to keep the building as simple as possible in building form and internal layout. This design was then adapted to suit the specific requirements of the Halifax Academy. In particular wider than usual corridors were used throughout the school (3.0m rather than 2.0m). This extra corridor space then enabled the school to develop specific pupil’s educational needs in a more focused manner by using the extra space for breakout teaching, small group work and one to one assisted learning.

The building was designed using a simple braced frame, we created a design that allowed for future flexibility by creating large open spaces where room partitions can be modified at a later date to suit the unforeseen changing requirements of the school.

As the new primary school was built on the existing secondary school site which remained operational throughout work had to be carefully phased and programmed around the pupils and staff schedules with most of the major construction work being undertaken during school holidays to minimise disruption. To reduce construction time on site a modular design was chosen allowing large elements of the building to be built off site and the design was coordinated using revit and BIM allowing the team to resolve any discrepancies before starting the construction phase.

The design was so successful  it was used by the client for two further schools which opened in September 2018.

The project was also designed to achieve a BREEAM Excellent rating.